I know I usually do a post about what book I’m reading each week on Thursday, but the book I’m reading now I’m actually doing to review for Fiction Flurry. So I don’t want to spoil the fun and say anything here yet. So instead today you get another random Potter post!

Just like everyone else in the world, I have my favorite characters in everything I read.

Lord of the Rings? Aragorn. The Wicked series by Gregory Maguire? Elphaba. Hunger Games? It’s a pretty distinct tie between Cinna and Finnick, but I actually really like Katniss too. Will Grayson, Will Grayson? The first Will Grayson, but Tiny has a special place in my heart too. Prophecy of the Sisters? Lia.

Thinking about it, most of my favorite characters are also the protagonists of said books. Maybe that makes me predictable, but it also makes sense…why read a book if you can’t root for the main character?

And while I definitely root for Harry, he’s actually never been my favorite character in the Harry Potter books. Actually, two of the three characters I count as my favorites aren’t really even in the “starring” cast. They’re definitely important, but there are large gaps between when we see them around.

But I’ll get to them later.

There’s one character in Harry Potter that I’ve adored since the very beginning.

Honestly, I think the reason I was so drawn to her so early on was because it was like reading about myself on the page. She’s kind of nerdy, definitely a know-it-all, a bit of a teacher’s pet. She loves school and reading and books. She’s very logical. When I was in eighth grade, that pretty much summed me up. I was definitely a nerdy, know-it-all, teacher’s pet who loved school and books. That changed a little as I grew older, but for the most part those facets of my personality still remain. Poor Hermione starts off the series as something of an outcast, and just a couple years before I started reading the books, I was an outcast too. The concept of friends I could truly rely on was a relatively new one to me when I started reading Harry Potter. 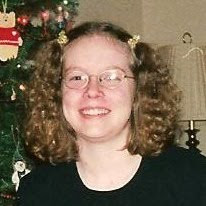 I even had the out-of-control, dirty blonde hair.

There were times I was compared to Hermione among my group of friends. I’ve dressed up as Hermione more times than I can remember. She’s always been my absolute favorite. I was beyond thrilled when I came to find out that she can be kind of a bad ass when she needs to (giving Malfoy a good slap in Prisoner of Azkaban, anyone?). When I’m reading a book, I can’t really deal with the poor-little-me, weak, damsel in distress. Most girls aren’t like that in the real world, why should they be like that in stories? I hate it when the female lead feels like her life is incomplete without the guy. It’s fine if the girl is a little weak, but she has to have some strength in her somewhere, even if she doesn’t realize it at the beginning. These are the characters I like to write, and the characters I like to read.

I think Hermione is one of the most real female leads I’ve ever read. She has her weaknesses and her insecurities, but she can take care of herself. She gets crushes on boys, but it doesn’t run her life. She sometimes needs help, but she’s also perfectly capable of taking control of a situation. She can be annoying, but what person isn’t like that sometimes? She gives Harry and Ron reality checks all the time, but she gets reality checks right back. She’s by no means perfect, which makes her that much more real. Hermione is awkward, uncomfortable with her appearance sometimes, but it’s not the central concern in her life. In my opinion, she’s about as real as a female character can get, which is probably one of the biggest reasons I’ve always liked her so much.