The release of Half-Blood Prince will remain in my memory forever for two reasons.

1. It was the first time I had a Potter party.

Sure, I’d done plenty of celebrating with friends for the movies, but as the movies always came out on school days, and at this time I had only just graduated high school, we’d never gotten to celebrate for an entire day. This was the first time my friends and I could fully geek out and count down the hours to the new book. We watched the movies that had come out on DVD by that time. We ate copious amounts of sugar. We laughed over Bertie Bott’s and threw half of them away because they were flavors none of us was brave enough to try. 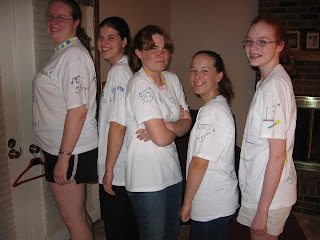 This in itself was both amusing and something of a fail. Amusing because we came up with some clever bit to put on each section of the shirts. Fail because Emmy doesn’t know how to tell her right from her left, so the obligatory group pictures turned out hilarious.

This was also the last summer of Media Play. Unlike the release of Order of the Phoenix, my friends I went over early and enjoyed the party over there too. We played trivia games and won points for our houses. Amanda won a stuffed Hedwig in a raffle. We found some of our other friends in line and geeked out with them too. We counted down to midnight, go our books relatively fast, and hurried home to read. While we were in Media Play, though, it had started to storm. Bad. Which leads me to…

I say “first” because it wasn’t technically my car, I just drove it more than anyone else in my family. It was a twelve-year-old Cadillac that was affectionately called The Boat. My friends and I had determined long ago it could probably win a fight against anything. 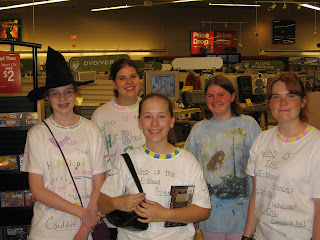 On the drive hom from Media Play, with the rain dumping and the storm raging, we hit a pothole. The car bumped hard, but we drove on. Emmy, who is prone to panicking, asked, “Did we just get hit by lightening?!” Janet told her no, that she probably wouldn’t need to ask that question if we had, because she would know. We laughed.

Later on release day, after a bit of sleep, I was reading in my room. The storm started again at random. I ignored it and read on. That afternoon, I left for my summer job at Ritter’s. Got in my car. It wouldn’t start.

Long story short, we come to find out The Boat had gotten struck by lightening in that second storm. The stupid lightening missed the tree the car was parked under, struck the raised antenna, and proceeded to fry my car’s electrical system. The lone survivor was the smiley face ball wearing a mortar board that had been perched on top of the antenna. The smiley face ball now has a scorch mark battle scar down his back, but I kept him anyway for the hilarious memory.

All this for one Harry Potter book.