I wouldn’t do it. I refused. For a month and a half during the beginning of eighth grade, I tried to ignore my friends’ insistence that I should. I tuned out their intense conversations in between classes about these people they loved that didn’t actually exist. They debated theories and storylines, and I rolled my eyes.

Not long into this, I came to find out two of my aunts were just as involved as my friends were. And my aunts liked recommending books to me. It’s how I got so immersed in the Dear America series. For several Thanksgivings, I came home with books my aunts thought I’d like. So between my friends and my aunts, I just kind of figured I’d have to do it eventually.

Sometime in October 2000, I gave up. I went to my friend Amanda for help.

“Fine. Tell me which one is first. I’ll read it, but I won’t like it. Then you guys have to drop it.”

We went to the library and she helped me find what I was looking for. I didn’t know which one was first. The only thing I knew about it was what my friends had told me. I was going in completely blind and completely convinced I wouldn’t like it. I didn’t like fantasy or wizards or magic.

After we found the book, I sat down at a table in the library and read the opening of this story so many people loved, but I was sure I would hate. The opening that I would later be able to quote verbatim, because I’d read it so much.

“Mr. and Mrs. Dursley, of number four, Privet Drive, were proud to say they were perfectly normal, thank you very much. They were the last people you’d expect to be involved in anything strange or mysterious, because they just didn’t hold with such nonsense.”

It was pretty much a downward slope for me after that. 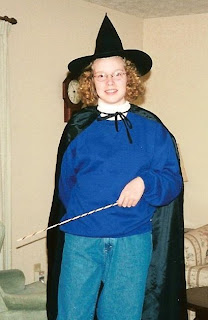 For over a decade, Harry Potter has been at some central point in my life. I first started reading the books after Goblet of Fire was released. In fact, I finished reading the fourth book while I was with the aforementioned aunts that Thanksgiving. Many of my fondest memories are from shared Potter experiences I had with friends. These books essentially defined my teenage years and the stories continue to play a part in my life as an adult.

I tend to re-read the whole series straight through at least once a year. Usually twice. I have yet to do it three times in one year, but I imagine it’ll happen someday.

This July marks the end of an era. The final Harry Potter movie comes out on July 15. There will be no more movies, no more books, no more releases of any kind to use as an excuse to dress up as a favorite character and party with fellow geeks. I was sad when the final book came out a few years ago, but I knew there were more movies to look forward to. Now those will be over too. It’s bittersweet.

But because of this, I’ve been rather reflective lately regarding the last ten years of Pottermania in my life. Over the next months, I’ll be reflecting these points on here. At first, it’s probably going to be a little random, but starting at the end of May or beginning of June, I’ll start to re-read the series again to get ready for the last movie. At which point, I’ll be reflecting on certain moments, certain theories or debates, certain bits of the story, etc. Book by book. Because each book holds special meaning to me. For the last three, I went to the midnight releases. There are specific thoughts I remember having regarding the books or theories around them. There are certain things that happened in my life that relate either directly or indirectly to reading Harry Potter at that time. And, of course, there are certain friends I have that I wouldn’t have known otherwise, certain experiences I’ve had that I wouldn’t have gotten to have.

I feel like, because Harry Potter has held such a spot in my life for so long, it’s long overdue to reflect on all of this. I hope you join me for this ride.