I won’t even bother starting this one saying that it’s been months since I posted, since we all know that.  So I’m just going to move on!

It’s now December.  This year has been a particularly weird one for me, likely because of the whole getting married thing, so everything’s been feeling rather, well, out of sync as far as the normal passage of time should go.  Since I got married at the tail end of the summer (August), three weeks after performing in Dublin Irish Festival, the earlier summer months were devoted 15% to Dublin Irish Festival rehearsals and 85% to frantically trying to get wedding stuff done.  After the wedding, we left for a week-long honeymoon, and got back literally a day before September started.

That’s a really long story just to say that it didn’t feel like I ever really had a summer, in the normal sense I usually do.  And when late August and September came around, and the commercials on TV were all talking about back to school sales, I was legitimately confused, because I felt like there should have been at least another six weeks before schools would start again.

So here we are in December, and it doesn’t really feel much like December to me.  Sure, our apartment is decked out in Christmas decorations, I’m listening to Christmas music, and I’m going Christmas shopping this weekend with some girlfriends.  But in my mind, it just…doesn’t feel like it should be Christmas time yet.

I think my body clock is about a month behind, all due to my crazy summer and my multitude of life changes.

Anyway, last month was actually (no, seriously, Erin) November, which meant that it was yet another National Novel Writing Month.  This was my eleventh year doing NaNoWriMo, and ended up being my seventh year crossing the 50,000-word finish line!  Which, you know, is kind of an exciting accomplishment, not to mention because the first week of November found me in jury duty for four days (never got picked, though, so no fun stories from that).

If you have any interest at all in how the novel writing actually went — well, let’s just say it was nice to get back into a regular novel-writing groove.  The novel itself was fun for the first two-thirds of the story, and then got weird, and kind of drifted off.  The last chapter was mostly my main character rambling just so I could reach the 50,000 word goal.  Longest.  Resolution.  Ever.

Which is an important lesson — sometimes novels I write end up staying in their little drawers, for my amusement only. 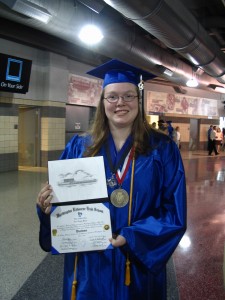 Me after my high school graduation (June 2005)

November was also the month of my — and this still feels weird to say — 10 year high school class reunion.  Yes, the picture above was taken ten years ago (plus a few months).  I kind of believe that there are a handful of events that occur in most people’s lives that just naturally make a person feel “officially” old.  Celebrating your 30th birthday, perhaps.  Experiencing a “baby” sibling graduating college and getting their first “big kid” job.  A child growing up, moving out, and getting married.

And, of course, high school reunions.

My class didn’t have a five year reunion, for good reason.  It was only five years; we were probably still a little sick of each other, and the people I wasn’t sick of I was still in touch with.

Look how much things have changed in the last ten years! 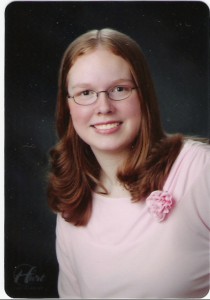 One of my high school senior pictures

My husband and I on our wedding day

Ten years since high school graduation.  Wow.  In the last ten years, I’ve learned a lot and experienced new things.  I’ve written a lot.  I’ve done things I was scared to do, like traveling alone.  I’ve graduated from college, started learning Irish dance, met the love of my life, and got married.

I’d say the last ten years have been pretty awesome.  Who knows what the next ten years will hold?